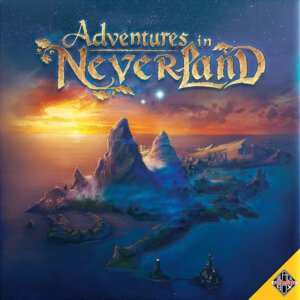 Black Box Adventures are in the midst of a Kickstarter project to bring a new game to the masses based on the classic J.M. Barrie novel Peter Pan. Adventures in Neverland allows players to either compete to complete their character’s individual stories or cooperate together for a shared victory. The game is for two to four players, ages 12+, and plays in one to two hours. The project is over 400% funded and you can reserve a copy of the retail edition for a $61.00 pledge through May 27th. Expected delivery is next March.

Take the role of the wayward Peter Pan, the notorious captain James Hook, and many more while you explore the ever-changing island. Your choices will guide you through different storylines, from the seductive merfolk in the lagoon, to the brave natives in the mountains and all the other secrets the island has to offer. Gain allies and items, unlock new abilities, interact with locations and characters and gain experience during multiple adventures. As everybody’s Neverland is different, every game will be a new adventure, with new possibilities and challenges to face. Although there will be a winner at the end of the game, the unfolding of the stories on the immersive island of Neverland are key.

In this story driven adventure game, 2-4 players take on the role of a main character in the world of J.M Barrie’s “Peter Pan”. The game takes around 30 minutes per player, is played in turns and is suitable from the age of 12. The base game includes 6 characters with unique stats and abilities, each with a competitive story. In addition the base game includes one cooperative story for multiple characters. Additional stories can be added and combined. Adventures are narrated through story cards, happenings, and side quests of 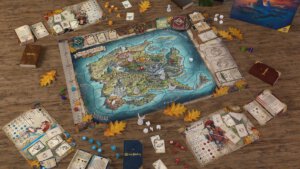 your choice. You can interact with other characters and locations on the island. While the immersive stories ensure you’ll find yourself in a world of wonder and mystery, the players’ choices will re-imagine Neverland every time you play the game.

The game is played in turns. Each turn a player has 3 actions to move and interact with player characters and non-player characters. Players explore the island of Neverland while interacting with stories, happenings, other characters and special locations. The story, goal and challenges are narrated through cards with multiple available options. As every chapter of every player poses multiple outcomes, your adventures on Neverland will be different every time you play. Players can earn adventure points to level up their character.

The game ends when the side quest deck runs out or all players finish their story. The player with the most adventure points wins the game; Cooperative stories may have different end of game and win conditions.