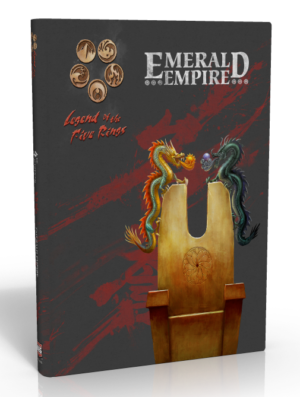 The Legend of the Five Rings RPG will release Emerald Empire 4th Edition in April 2011.  Emerald Empire was one of the hottest selling books in the L5R RPG line, and a reprint has been continually demanded.  AEG answers with a new update to the book, bringing all of the mechanics up to 4th Edition, as well as adding upwards of 30% new content to the book.  Included are new chapters on the Arts, a deeper look into Rokugani religion and more.

For those who have not owned Emerald Empire, or are new to the Legend of the Five Rings RPG with 4th Edition, Emerald Empire is a study of all aspects of life in the Emerald Empire of Rokugan.  Everything from politics to the Celestial Order, arts, war, family life, customs, and much more. The life of a samurai is a demanding one, but also a full and engaging one, and Emerald Empire 4th Edition brings that to you.

Also featuring a full glossary of Rokugani terms, and an update to the classic Way of the Daimyo, Emerald Empire is a book that is a must have for your collection!