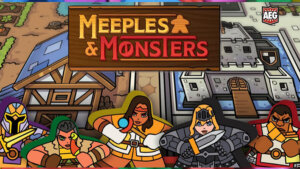 Yesterday AEG launched a Kickstarter for the latest game from designer Ole Steiness. In Meeples & Monsters, players will recruit and train heroes to protect the town of Rowan. The game is for two to four players, ages 14+, and plays in 45 to 90 minutes. The project already funded in the first minutes and you can reserve a copy of Meeples & Monsters and unlocked upgrades, for a $49.00 pledge through March 19th. Expected delivery is next March.

The peaceful city of Rowan is surrounded by dangerous monsters. It’s up to the citizens to fortify the city, train up warriors, clerics, knights, and mages, and defend Rowan in Meeples and Monsters!

Meeples and Monsters is a big, beautiful bag-building engine builder by designer Ole Steiness (Champions of Midgard and more). Depth, replayability, beautiful components, and a splash of meeple humor will have you coming back for “just one more play” game night after game night!

This deluxe Kickstarter includes a bunch of upgrades and extras, including the 4-towers expansion and everything you need to play the solo version designed by Mike Mullins (solo designer for Lagoon, Tussie Mussie, Castle dice and more).