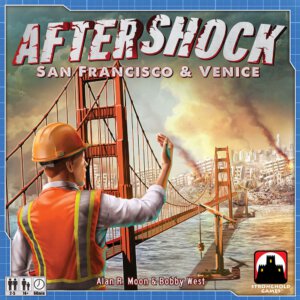 Aftershock: San Francisco & Venice, from Stronghold Games, enters the final stretch having passed 200% of it’s funding goal. In the game, players will attempt to rebuild San Francisco (or Venice) following a devastating mega-earthquake. Whoever scores the most points through careful city planning is declared the winner. Aftershock: San Francisco & Venice is for two to five players, ages 14+, and plays in around 60 minutes. You can reserve a copy, plus all unlocked stretch goals and a 6th player expansion, for a $45.00 pledge through March 11th with an expected delivery date of November of this year.

The world has been hit with mega earthquakes. The worst destruction has devastated the San Francisco Bay area. It is a time of rebuilding to restore this area to its former glory.

In Aftershock: San Francisco and Venice, players will spend money to acquire planning cards, which are used to increase population, build bridges, and determine where aftershocks occur. Spend money wisely to acquire aftershocks that will allow you to move people into and out of the demolished areas. Planning and careful negotiation are essential in order to maintain your population and score your best-planned cities and bridges.

Aftershock: San Francisco and Venice is an area control and resource management game for 2-5 players that plays in 60 minutes. The player with the most points at the end of the game wins! 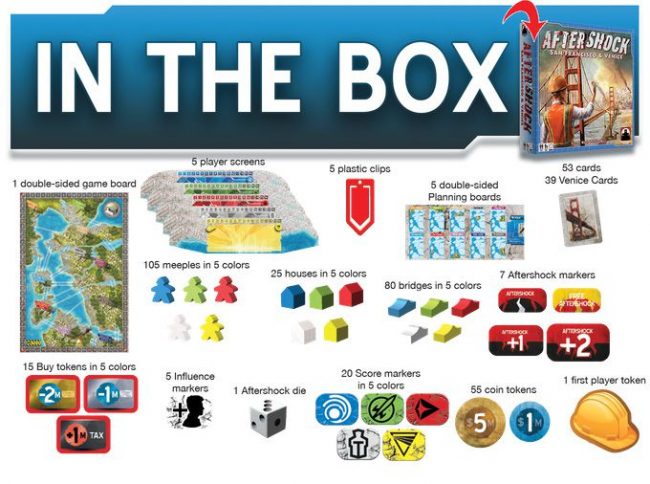