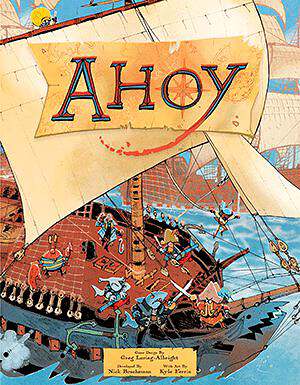 Leder Games will be releasing the latest game set in the Root universe this Fall. In Ahoy, players will compete on the high seas as swashbuckling faction aiming to complete their own unique objectives. The game is for two to four players, ages 14+, plays in around 45 to 75 minutes, and will carry an MSRP of $40.00 when it arrives in the Fall.

Ahoy is a lightly asymmetrical game in which players start in a playing area composed of a few tiles, with each tile being divided into a 2×2 grid that features water, land, and various icons.

When playing with only two, one player controls The Bluefin Squadron and the other The Mollusk Union, and you’ll compete to control different areas of the revealed terrain, with exploration revealing new lands over which to fight. When you add a third or fourth player, they each act as smugglers who are trying to pick up various items and deliver them to indicated areas. If the items or areas aren’t visible, then you better start exploring to turn them up!

Jeff McAleer
Founder/Editor-in-chief of The Gaming Gang website and host of The Gaming Gang Dispatch and other TGG media, Jeff tackles any and all sorts of games but has a special fondness for strategy, conflict sims, and roleplaying games. Plus, he's certainly never at a loss for an opinion...
Latest posts by Jeff McAleer (see all)
Tags: Ahoy, Leder Games

25th Century Games to Release Blazon Board Game This Month