Our friends at Warlord Games have the latest Napoleonic supplement for their Black Powder series. Albion Triumphant Volume 2 focuses on the 1815 campaign (known as The Hundred Days) as Emperor Napoleon Bonaparte slipped away from his exile to lead the French army, in an attempt to restore his stranglehold of European dominance, which culminated in one of the greatest battles of history: Waterloo. The supplement is scheduled for a May release but, for those who pre-order, the book will be ship on April 20th. Albion Triumphant Volume 2 – The Hundred Days Campaign clocks in at 132 pages and carries an MSRP of $32.00, which includes an exclusive miniature as well.

On a damp, overcast Sunday in June 1815, twenty years of continuous warfare – the Napoleonic Wars – came to a violent and bloody conclusion on a rain-soaked field in Belgium. These wars were truly a world affair, with European powers fighting battles not only on the mainland of Europe but as far as India, Egypt, the Caribbean and America.

The greatest generals of the age finally faced each other on the field of battle; The Duke of Wellington, rooted to a little-known ridge, faced, the Emperor of the French. Napoleon Bonaparte, master of the attack, opposed brigades of British, Germans, Dutch and Belgians; brigades of an infamous army that, despite horrific casualties, clung to the ridge for over nine hours to ensure that the arrival of Blücher’s Prussian army would put the Duke’s victory beyond doubt.

The Battle of Waterloo became a true landmark in military history, one that will never fade, and nothing on such a grand scale would be seen again.

This supplement for Black Powder overviews the main battles, armies and personalities of the Hundred Days campaign, and includes army lists, scenarios and special rules to enable you to re-fight them using the Black Powder rules.

132 pages of Napoleonic army lists, background, troop stats and scenarios make this an absolute must for lovers of Black Powder, of Napoleonic gaming or simply of gloriously produced wargaming books!

You will need the Black Powder rulebook to use Albion Triumphant Volume 2 – The Hundred Days campaign. 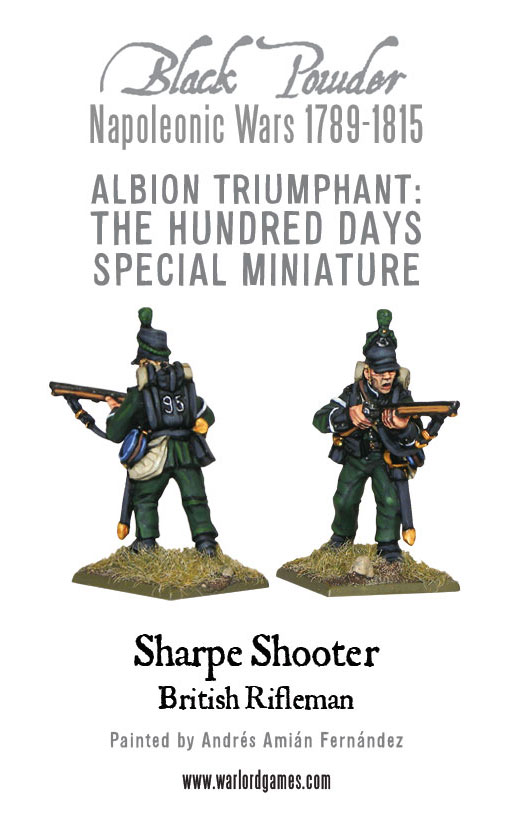 As you’ve come to expect from Warlord Games book launches we are giving away an exclusive miniature, Warlord sculptor, Wojtek, created the special edition miniature that will be sent for free with any purchase of the new book directly from us at Warlord (via the webstore, over the phone or in person at shows – you can even drop in to see us at Warlord HQ and pick yours up in person!)

Featuring the British Rifleman depicted on the cover!, this sharpshooter will look great in any Napoleonic British army.

Released early to mid May 2013, pre-orders will be shipped just before Salute weekend (20th April) with the book being available on the day of the show from Warlord Games!

Please note: If you want to pick your copy up at Salute a good few weeks before general release, you can pre-order through our webstore and during checkout use ‘Pick up order at Show’ as shipping method. If you need any help with this please do not hesitate in contacting us.

Jeff McAleer
Founder/Editor-in-chief of The Gaming Gang website and host of The Gaming Gang Dispatch and other TGG media, Jeff tackles any and all sorts of games but has a special fondness for strategy, conflict sims, and roleplaying games. Plus, he's certainly never at a loss for an opinion...
Latest posts by Jeff McAleer (see all)
Tags: Albion Triumphant Volume 2, Black Powder, Warlord Games