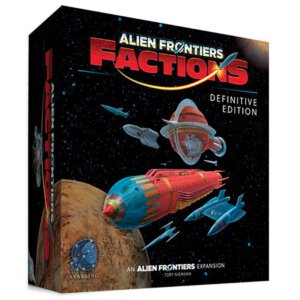 Starling Games will be releasing a large scale expansion for Alien Frontiers later this year and collects all the previous extra factions and introduces a new one as well. Alien Frontiers Factions: Definitive Edition combines everything into one box and adds the Mercury Angels as well. You’ll need to core game of course and Alien Frontiers is for two to four players, ages 13+, plays in around 90 minutes, and the expansion will carry an MSRP of $50.00 when it arrives in Q4.

Alien Frontiers: Factions expands the award-winning Alien Frontiers core game, including new Alien Tech cards to expand your technological arsenal, new Agenda cards that earn you Victory Points for completing hidden objectives, and individual Faction boards that give their owners an exclusive bonus as well as providing another facility that anyone can use…for a price.

The Definitive Edition combines all of the Factions and Agenda cards from across all Faction Packs and Expansion packs, plus the new Mercury’s Angels faction.