Zombie Feast is the beginning of the Blood Lords adventure path, which sees players face off against the treacherous Chancellor Kemnebi and his attempt to raise a personal army of undead tens of thousands strong. There’s just one twist — rather than playing valiant heroes dedicated to the cause of goodness, players are instead a group of aspiring Blood Lords in the nation of Geb, ruled over by an undead king and likely partaking in necromancy and other acts of “dark” magic. It’s not that the characters are particularly motivated by saving lives, but rather by securing favor — and preserving the kingdom’s finances.

Player characters are summoned by Berline Haldoli to investigate disruptions on Old Ergagh’s farm, bringing them into conflict with the Three-Fingered Hand gang and unknowingly placing them on Kemnebi’s trail. On the way, they manage to acquire a base of operations as well as a variety of goods, typical for what one would expect for a level 1-4 adventure. The nature of the players’ task allows characters with a variety of skillsets to shine, first as they repair equipment, then as they corral zombies, befriend their friendly disembodied hand servant, discover their new home’s hidden secrets, wine and dine an influential priest, and of course, engage in vicious combat.

One of the most interesting additions is the need for faction reputation management. As players advance through the adventure path, they’ll need to curry and balance favor with Geb’s Great Factions in order to complete their mission. Recent Pathfinder outings have made excellent use of this mechanic, raising the potential for some truly excellent power grabs and maneuvering for players. It does, however, raise the possibility of player-on-player backstabs should the party not align on its goals, something GMs will need to be mindful of as the adventure path continues.

While it’s hard to say if Zombie Feast is meant to be as funny as it is, the adventure’s dark humor and gloriously macabre art are delightful. Little details, like a skeleton named Reacher whose job is to reach things on high shelves for his halfling mistress or four disembodied hands who neatly clear away a meal, offer a level of zaniness that will either resonate with players or require GM modification to really sell, though that’s true of the adventure path at large. The core conceit —a group of up-and-coming Blood Lords in a nation of undead and necromancers coming together to save tens of thousands of lives because their checked-out ruler’s advisor has a plan to grab power for himself— is rife with potentially hilarious moments and character beats, especially for players who enjoy a bit of hamming it up at the table. This might make it a strange fit for those more accustomed to playing traditionally “good” characters, but it also opens the door to those interested in exploring Lawful Evil characters who are not necessarily villains. For the right group, or a GM capable of flavoring the experience to better meet player tastes, Zombie Feast is a slam dunk.

Sami Yuhas
Writer, gamer, and necromancer bard (at least in D&D). Sami focuses primarily on board and tabletop gaming, with a focus on sci-fi and fantasy, as well as worker-placements and co-op titles. She prides herself on the ability to overthink world building in games, and cites a three post manifesto on the costuming of XCOM 2 as among her greatest nerd achievements.
Latest posts by Sami Yuhas (see all)
Tags: Mike Kimmel, Pathfinder, Pathfinder Blood Lords, Pathfinder Zombie Feast 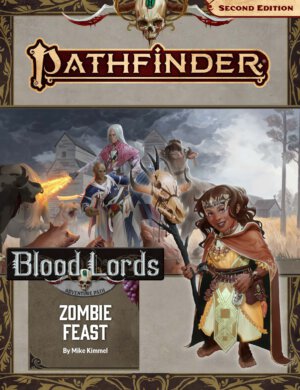 Zombie Feast is the beginning of the Blood Lords adventure path, which sees players face off against the treacherous Chancellor Kemnebi.
8.5
Excellent