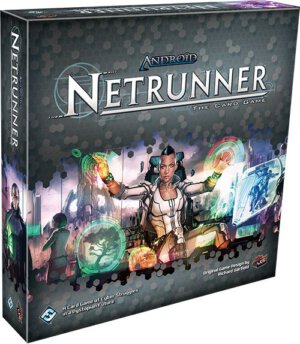 Fantasy Flight Games has announced a new core set for their hit living card game Android: Netrunner. The revised core set will take players into the cyberpunk world of Android and includes 247 player cards, 133 Corp cards, and 114 Runner cards. The core box will not be available for the upcoming Android: Netrunner Championships this November but should be available in time for the holidays and will carry an MSRP of $39.95.

It is the future. The world has changed. Crime has not.

Boot up and run!

The Revised Core Set is your ticket to the not-too-distant future of Android: Netrunner The Card Game. This is an age of sprawling megacities. Artificially intelligent bioroids and genetically modified clones work alongside cyborgs, g-modded humans, and naturals. Hoppers pass overhead in their skylanes, and in New Angeles, a Space Elevator most commonly known as the “Beanstalk” dwarfs neighboring arcologies and skyscrapers as it reaches beyond the Earth’s atmosphere and gravity to serve as a low-cost launch for near-space travel. 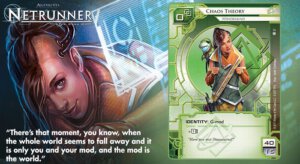 With more than 240 cards, the Revised Core Set immerses you in this age and its high-stakes cybercrime. In this future of monolithic megacorps and augmented runners, the all-encompassing network is both one of humanity’s greatest assets—and one of its deadliest battlefields. Transmitting more data every second than was expressed in the first 5000 years of written language, the network is home to all manner of data, including countless corporate secrets. While the corps guard these secrets behind layers of defenses known as ice, they still remain vulnerable to those elite hackers known as runners.

Built upon a classic design by Richard Garfield, Android: Netrunner casts these struggles between Corp and Runner as tense, asymmetrical, cat-and-mouse duels for control of valuable data. Jack in, and you enter a world of countless bluffs, counterbluffs, and economic struggles. Every moment offers new choices, and the Revised Core Set comes with everything two players need to dive deep into this acclaimed Living Card Game!