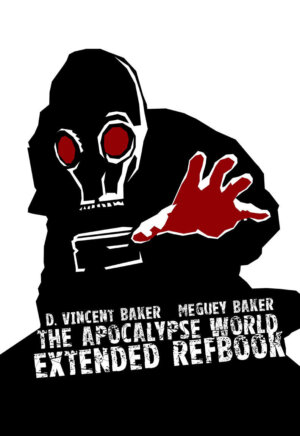 A new release for Vincent Baker’s Apocalypse World has arrived in PDF. Check out new playbooks and other content, which had previously been scattered across various sources, in The Extended RefBook. The 78 page PDF can be had for $10.00 at DriveThruRPG.

Apocalypse World has always had this orbiting body of playbooks, originally called “limited ed,” now called “extended,” that aren’t in the book. They expand Apocalypse World in various ways in various directions, some pretty dramatic.

The Extended Refbook is a set of these extended playbooks with expanded explanations and helpful text. It includes some old familiar playbooks like the Quarantine and the Show, plus some playbooks that have been available only to a limited audience, like the Symbiote, the No One, and the Contaminated, plus some weird things like the Skiller and the Landfall Marine’s Reclamation Mission. It also includes the 1st Ed rules for fronts, updated to 2nd Ed.

The “Spreads” file is suitable for printing and bringing to the table.