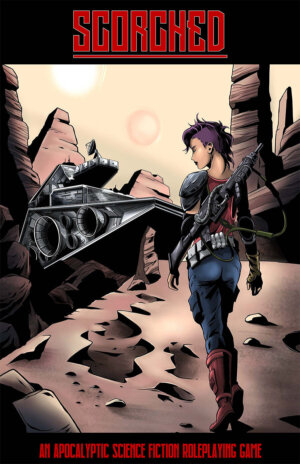 An interesting looking apocalyptic roleplaying game has arrived from Bloat Games. Carrying a heavy Star Wars meets The Road Warrior vibe, Scorched clocks in at 223 pages of RPG goodness. The PDF of is available right now at DriveThruRPG for $9.99.

This game is based on the simple concept, “What if Luke never left Tatooine?”

It’s definitely heavily Star Wars inspired with a side of Mad Max thrown in for good measure. And did we mention, it has Power Armors?

Scorched is a full stand-alone TTRPG, clocking in at 223 pages, but is also fully compatible with The Blackest Space and can be used as a supplement to that game, also.

Scorched is a game that utilizes the BoD game system created by Eric Bloat for The Blackest of Deaths RPG.

The BoD game system is based on the d20 OGL with updates and alternate rules, most-notably the Core Mechanic:  Roll 1d20 & 1d6 Simultaneously

When you attack, make a save, make a skill, etc. roll a d20 and a d6 and add any applicable modifiers to the d20 roll.

If you meet, or beat, the target Difficulty Check or Evade score you succeed.

Hindrance adds an additional challenge or difficulty that was not present before the attempt.

Example: A Security Officer is successful with their laser attack; however, the laser gun has jammed and it costs the Officer their next attack to fix it.

Benefit adds an additional convenience that was not present before the attempt.

Example: An attacker using their laser gun misses the mark; however, as the opponent attempts to dodge the attack, they hit their head on a doorway.