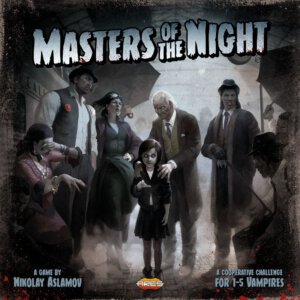 Currently up for crowdfunding for Ares Games is Masters of the Night. The game is a co-operative endeavor where the players are members of a vampire coven aiming to take control of a city. Masters of the Night Is for one to five players, ages 13+, and plays in around one to two hours. The project just stated and is past the halfway point to it’s goal. You can reserve a copy of the standard game for a $39.00 pledge or the premium edition for a $49.00 pledge through February 5. Expected delivery is December of this year.

Woken by the rattling of the train, you realize you have arrived at a new place, a place destined to be either a haven or a final grave for your family. Your current state is unsightly at best—forced to hide in a luggage car, confined within boxes full of dirt. You have all spent far too much time dreaming; years, perhaps decades. It is finally time to wake from your slumber and take matters back into your hands.

How has the world order changed during your absence? The Veil that covers the truth of your existence from the mortals—is it still strong? Do the agents of the Inquisition still scour the world for you? And more importantly, will this city succumb to your will? First there will be the struggle for survival, then for power and, finally, for dominance.

History exiled you from castles and crypts long ago. In this new century, you are wanderers, endlessly searching for a new home, new servants and fresh, fervid blood.

Masters of the Night is a  solitaire or cooperative game – one to five players play on the same side and will either win or lose together. You play as members of a vampire clan slowly regaining their former power. With the help of your minions, you will fight against the agents of the Inquisition, cast fear into the hearts of the people with your hunts, and shape dread sigils in different city districts, all in preparation for the grand Blood Moon ritual that will 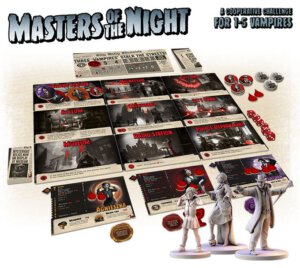 confirm your grasp on the city and its fate. But beware, the longer you prepare for the ritual, the harder it will be to complete it. Your enemies are searching for you constantly and when they find you, even vampire magic may not stop them.

In Masters of the Night you will find: