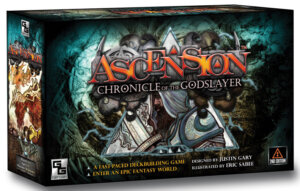 Gary Games, today announced the launch date of the newest addition to their Ascension deck-building game line, Ascension: Immortal Heroes. The latest expansion will be available on Nov. 5, 2012 through its website, Ascensiongame.com and select local retailers. The new product developed by Gary Games will retail for MSRP of $29.99 and is the second set to supplement Gary Games full size expansion, Ascension: Storm of Souls, released in Jan. 2012.

“Our goal in developing Ascension: Immortal Heroes is to continue the Ascension year two story arc and expand on the exciting mechanics from Ascension: Storm of Souls,” said Gary Games founder and CEO, Justin Gary. “We tasked ourselves to take Ascension to an elevated level that not only meets our high standards, but our fans expectations as well.”

In Ascension: Immortal Heroes, players will utilize the all-new Soul Gem cards in an attempt to stop Kythis’ evil plans to enslave the souls of heroes from the first war. Players will recognize many of their favorite heroes from year one, along with an entirely new set of monsters, heroes and constructs.

All Gary Games designs feature high quality art and in-depth game strategy that offer a dynamic and fast paced play experience where players can react and adjust their strategies accordingly. Ascension: Immortal Heroes will join its sister games including, Ascension: Chronicle of the Godslayer, Ascension: Return of the Fallen, Ascension: Storm of Souls and Ascension iOS.