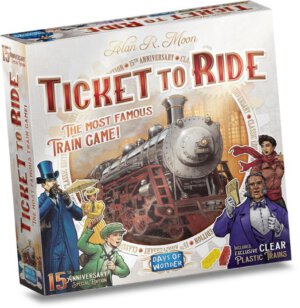 Days of Wonder is celebrating fifteen years of railroading fun in Ticket to Ride and revealed a new edition is on the near horizon. This edition will include everything the core game normally contains plus 240 new exclusive clear plastic trains and a retrospective booklet featuring the development of the classic title. The 15th Anniversary Edition of Ticket to Ride is for two to five players, ages 8+, plays in 30-60 minutes, and will carry an MSRP of $49.99 when it arrives on August 9th.

With elegantly simple gameplay, Ticket to Ride can be learned in under 15 minutes. Players collect cards of various types of train cars they then use to claim railway routes in North America. The longer the routes, the more points they earn. Additional points come to those who fulfill Destination Tickets – goal cards that connect distant cities; and to the player who builds the longest continuous route.

“The rules are simple enough to write on a train ticket – each turn you either draw more cards, claim a route, or get additional Destination Tickets,” says Ticket to Ride author, Alan R. Moon. “The tension comes from being forced to balance greed – adding more cards to your hand, and fear – losing a critical route to a competitor.”