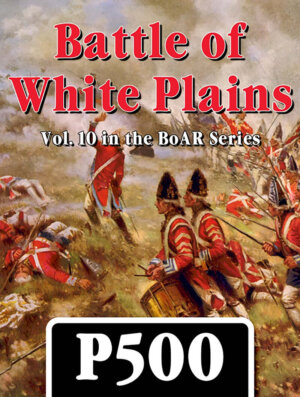 The Battles of the American Revolution series has a new title up for preorder on the P500 list at GMT Games. Battle of White Plains tackles the historical battle during the 1776 New York campaign as well as larger hypothetical clashes. The game is for one or two players, ages 14+, and can be preordered for $48.00 with an expected MSRP of $69.00.

As it occurred, the Battle of White Plains could properly be called the Battle for Chatterton Hill. This relatively limited affair, fought on the American right flank on October 28, 1776, was the only set piece action between the two protagonists. Here some 4,000 British and Hessian troops attacked fewer than 2,000 Americans with the King’s forces ultimately prevailing.

The main armies, however, were enormous for the period with 14,500 Americans confronting 13,000 British and Hessians who were eventually reinforced to 15,400, making this one of the largest concentrations of opposing troops during the war and the largest game in the Battles of the American Revolution series to-date. Yet despite this concentration of forces along a front barely three miles wide, the armies sat primarily idle after the fight for Chatterton Hill while the British probed at the flanks, and the Americans improved their defenses.

The game includes three scenarios: the historical fight for Chatterton Hill, an October 31 scenario that explores what might have occurred if Howe had pressed his grand assault that day as planned, and a full four-day campaign game spanning 42 game turns beginning with the arrival of the British army on the field on the morning of October 28 and culminating at 5:00 pm on October 31.

Each player has 26 Opportunity Cards subdivided into three decks to enhance play and add elements of variability and historical flavor. As with previous games in the series, some special rules represent the unique circumstances of this battle. Among these are rules governing American sortie restrictions and tactical doctrine, rain game turns, restoring army morale, scorched earth, and additional handicaps for American militia, American fieldwork construction, and an off-board movement mechanism for Tarrytown on the Hudson River, seven miles away where British ships lay at anchor. Even Washington’s own combat prowess at this early stage of the war is randomized.

In Volume 10 of the Battles of the American Revolution series, players command two titanic armies: Washington, desperate to salvage something from the otherwise disastrous defense of New York, and Howe seeking a coup de grâce against the “Old Fox.” You will have to manage your forces over the span of four days with lots of inclement weather to contend with. Can you, as General Howe, break through the American line to deliver a decisive blow and end the rebellion? Can you, as General Washington, hold your own on superior ground, hampered as you will be with some 6,700 militia of dubious quality—fully 46% of the total American force?