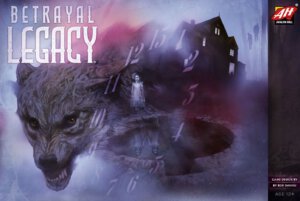 The Avalon Hill imprint of Wizards of the Coast is prepared to release a new horror, legacy style game next month with Betrayal Legacy. The game, designed by Rob Daviau, will place the players in a series of terror tales where you’ll actually own your own custom game based on the players’ previous decisions. Betrayal Legacy is for three to five players, ages 12+, plays in around 45 to 60 minutes, and will carry an MSRP of $75.00 when it arrives November 9th.

Betrayal Legacy is a semi-cooperative campaign board game that tells an overarching story of the House on the Hill incorporating the actions and choices of the players.

Over the course of the campaign, the game is permanently altered until players are left with a fully customizable, re-playable version of the critically-acclaimed Betrayal at House on the Hill.

Fans of the original Betrayal at House on the Hill and Betrayal at Baldur’s Gate will enjoy this fresh take on the classic game. However, there’s no previous experience necessary to play—even players new to the brand can jump in, explore, and affect the spooky history of the legendary House on the Hill.