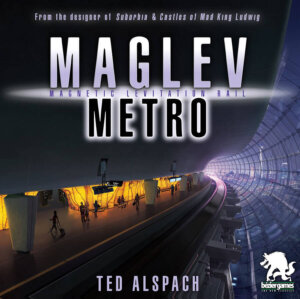 Next month will see the release of a new train game, designed by Ted Alspach, from Bézier Games. Maglev Metro tasks players with designing new magnetic levitation transportation systems below the streets of Manhattan or Berlin. The game is for two to four players, ages 14+, plays in 60 to 90 minutes, and will carry an MSRP of $69.99 when it arrives in late February.

Welcome to the future of train games! With the of use cutting edge magnetic levitation technology, transport passengers and robots beneath the cities of Manhattan and Berlin as efficiently as possible. Put your delivered robots to work by creating a seamless engine tailored to your unique strategy in the pursuit of victory.  Deliver your passengers for big points at the end of the game!

Maglev Metro is a tile placement, pick up & deliver, engine building game from Ted Alspach for 2-4 players. The inventive transparent tiles in Maglev Metro create a train game experience unlike any that has come before.  Now, all route options are open to you regardless of how many tracks are already placed! Stand clear of 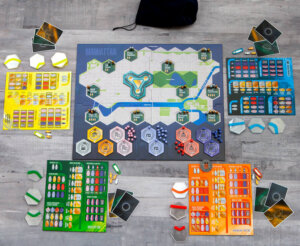 the closing doors and enjoy the ride on Maglev Metro!

Efficiency is your key to success in this pick-up-and-deliver, tile-laying, engine-building game. Transparent tiles allow your route to overlap your opponents’ tracks, winding you along from station to station. Robots efficiently upgrade and adjust your abilities, leveraging unique goals to maximize points. By the end of the game, the game board has morphed into a modern subway map, with brightly-colored routes connecting stations all over the city.