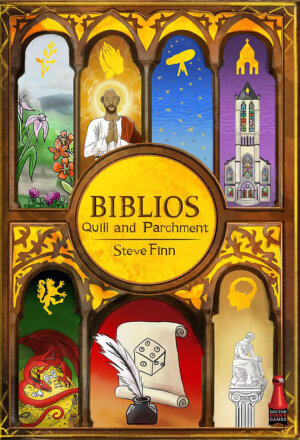 This March will see Doctor Finn’s Games release a roll and write game based on Biblios. In Biblios: Quills and Parchment, players will take the roles of monastic scribes copying books and looking to gain influence with their abbot. The game is for one to four players, ages 14+, plays in a round 30 to 40 minutes, and will carry an MSRP of $28.00 when it hits stores.

A “roll and write” version of the popular Biblios.

The life of a monastic scribe is not easy. Every day you spend long hours in the monastery copying books, praying, and performing tasks. Through hard work and prayer, earn the abbot’s trust and display your dedication to the pious life.

The object of the game is to score the most piety points. The game consists of 8 days (i.e., rounds). In the first 4 days, players simultaneously roll their own dice (that show various book types, abbot influence and travel points) and may do so up to 3 times. After each roll, the players have 3 options: (1) to keep the dice as shown, (2) to reroll exactly one die or (3) to roll all the dice.

Most of the dice are resource dice showing books monks are copying, but there are also abbot influence dice (abbot influences is accrued in the first half, but spent in the second half of the game), and a travel die (allowing a player’s novice to go out into towns to do good works and find more books).

In the last 4 rounds, players use their abbot influence to bid for a priority of tasks.

This is a rare (if not unique) “roll + write” game that includes auctions and, unlike many roll + write game; it is highly interactive.

After 8 days, the game ends and the players calculate scores. As in the original Biblios, the relative value of books changes during the game, so players are unsure of which books will be most valuable until the end of the game. 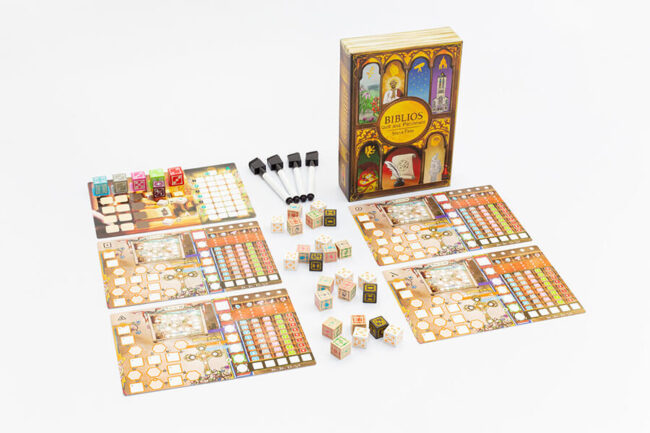