Bicycle Cards is expanding into the tabletop gaming arena with two new introductory board games: The Alpha and Exchange. Each of these games are for three to six players, ages 10+, and play in an hour or less. Expect both games to arrive in stores on June 16th carrying MSRPs of $29.99 each. 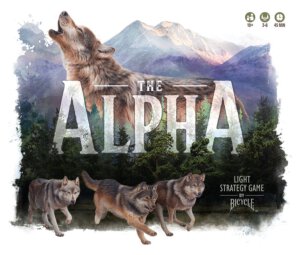 Lead your wolf pack as you claim territory, search for food, and hunt prey. After a successful hunt, you may enter a conflict with another pack. If that happens, you will have to decide whether you want to risk injury by fighting to keep the food for your own pack, or risk giving up all the food found in the region by sharing with the other pack.

In The Alpha, players control a wolf pack, leading wolves on a search for food. The Near Forest includes easier to catch, but lower value prey. The Far Forest has larger prey that are more difficult to attack, but if successful can result in great reward.

You will lead your wolves through four stages of the hunt:

1. STALK – Send your wolves to hunt in various regions of the forest and outnumber rival packs to become dominant in the area.
2. CHASE – Roll the dice for the region to determine the success of the hunt.
3. RESOLVE – Enter conflict and decide whether to fight or share food with other packs in the region.
4. ADVANCE – Move your wolf on the food track to indicate the amount of food secured during the hunt.
At the end of 5 weeks (rounds), the wolf pack with the most food will be declared The Alpha. 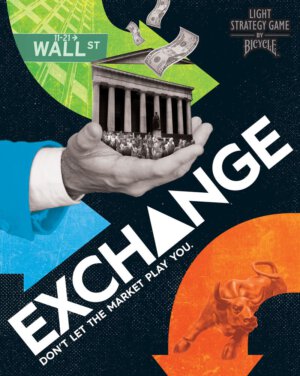 The year is 1792, and you and 23 New York City stockbrokers just signed the Buttonwood Agreement. In a few short years, this group of brokers would be known as the New York Stock Exchange, one of the greatest and most influential pillars in the global economy.

Exchange is a stock trading game of strategy and wit. Players carefully plan their strategy, phase by phase, trying to cash in big in a constantly changing market. However, playing the market is only half the battle- the only thing harder to predict than the stock market might just be the players sitting at the table with you. The one who can best match wits with their opponents will reign victorious in this fast-paced battle of social elite.

During each round players make their selection by putting the desired card face up in the phase sleeve and then placing it face down on the table. When all players have made their decision, all players reveal simultaneously before moving on to the next phase.

This lets players see what other people are doing so they can adjust their strategy during the following phases. However, the phase sleeves only reveal part of the information, so while you may find out what that a player is selling a specific stock you will not know how much.

Finally players get adjust the market, by moving the price of a single stock up or down. A Market Forces card will also be drawn, which produces a random effect on the market.

After the price for each stock has been adjusted, players complete their transaction with the bank at the new price, being mindful of the Market Bubble which can flip the price of a stock if the price gets too high or too low.

At the end of 5 rounds the player with the highest net worth (value in stocks + cash) wins the game.