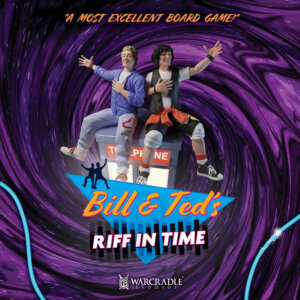 Later this month will see the release of Bill & Ted’s Riff in Time from Warcradle Studios. In the game, players take on the roles of Wyld Stallions as the band aims to return historic personages to their correct time before disaster strikes. Bill & Ted’s Riff in Time is for one to four players, ages 14+, plays in around 80 minutes, and will carry an MSRP of $50.00 when it hits stores.

The year is 2506 and something most unprecedented is happening to history… all throughout time, Personages of Historical Significance have been showing up in the wrong points of time! This is having egregious reverberations and is causing time rifts to materialise, threatening to disrupt the harmonic fabric of our reality!

The Wyld Stallyns have put their latest tour on hold and are trying to locate all the misplaced Personages, returning them to their correct points in time and closing the rifts. At the centre of the disruption is the most heinous time fracture of all, located in San Dimas. If all of the rifts are not closed in time, then reality will fracture and the world will be destroyed… bogus!

In Bill & Ted’s Riff in Time, players take on the role of members of Wyld Stallyns tracking down all the Personages of Historical Significance who have become lost at the wrong points in history. After they have been located, the players need to return them to their correct points in time, only then can a rift be closed. And quickly! As the game progresses, time cracks a little more –with dire consequences!

During setup, veteran players can increase the difficulty of Bill & Ted’s Riff in Time. By starting the rift in San Dimas at a higher number, the players will find they have more of a challenge whilst they attempt to restore history. 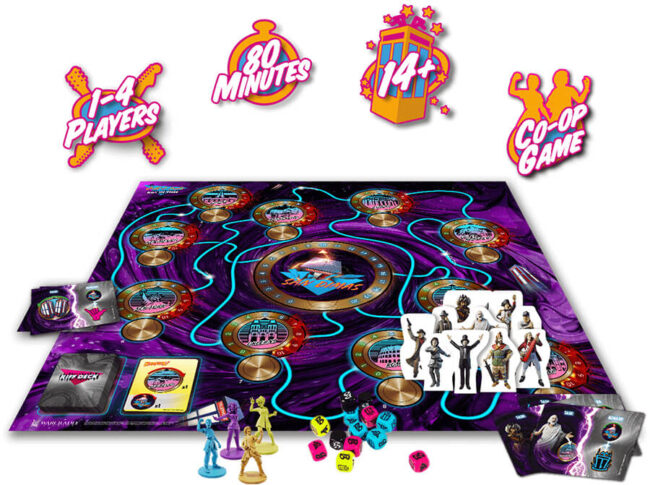