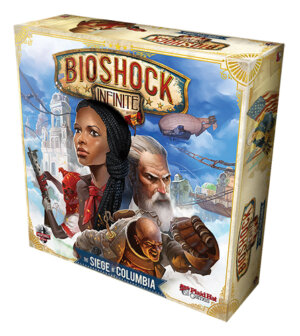 If you’re like me you’ve been anxiously awaiting the Irrational Games release of Bioshock Infinite for your favorite gaming platform and, lo and behold, Plaid Hat Games has announced a tie in title they plan to release in conjunction with the video game. Details are pretty light but there will be a variety of minis included and the design is by Isaac Vega. If the board game has even a fraction of the wow factor as the latest Bioshock offering looks to have, Bioshock Infinite: The Siege of Columbia should be pretty sweet indeed.

Plaid Hat Games is making a board game based on the upcoming video game Bioshock Infinite.  The board game is going to be called Bioshock Infinite: The Siege of Columbia.  The game is going to come packed with 52 miniatures, featuring 11 different unique sculpts.  One such sculpt has already been previewed in an article from Irrational Games, as they will be packing one in every collector’s edition of the video game.  You can find that article here.

If you haven’t heard of Bioshock Infinite yet you are not nearly as geek-cool as I thought you were.  You should go watch this trailer immediately.  This might be the coolest thing ever in the history of ever.

Speaking of cool, this board game is going to be totally rad.  It was designed by Isaac Vega. We’ll tell you more about it in the upcoming months.  We don’t have a release date yet but we are shooting for around the same time as the video game.

Keystone: North America is Set for a July Release