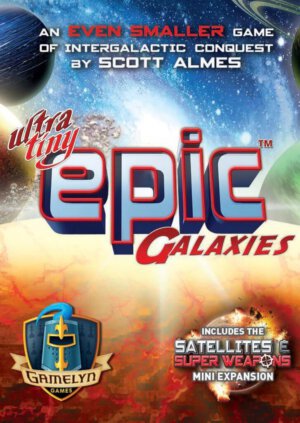 I really enjoy Tiny Epic Galaxies and this Fall will see an even more compact edition hit stores from Gamelyn Games. Ultra-Tiny Epic Galaxies packs all the fun from the original game (plus a mini-expansion) into a very small footprint box which will be perfect for on the go gaming. Will you lead your empire to cosmic glory? The game is for one to five players, ages 8+, plays in 30-60 minutes, and will carry an MSRP of $15.00 when it arrives November 1st.

Tiny Epic is a series of small-box, approachable board games that deliver far more than the box size would suggest. Each one features an easy-entry rule set along with a high level of strategy and a small foot print. Each Tiny Epic game is completely different in theme and mechanics.

In Tiny Epic Galaxies, and therefore Ultra-Tiny Epic Galaxies, each player controls their very own galaxy! In the game, they will be developing their own empire by managing resources, expanding their fleet, colonizing planets, and exploiting their enemies’ positions.

The game runs on a clever dice-combining mechanic; players roll for their actions and choose the order in which to take them. This can lead to big payoff turns, especially when combo’d with planet abilities!

Throughout the game, players spend resources to upgrade their empires, reroll unwanted dice, and even follow the actions of other players’ dice! The follow mechanic keeps all players engaged throughout the game for virtually zero downtime.

Players will accumulate power (victory points) based on the level of their empire, as well as for successfully colonizing planets. When a player has reached a power of 21 or higher, the end of the game is triggered.

Warhammer Age of Sigmar Soulbound: Shadows in the Mist is Available for Preorder