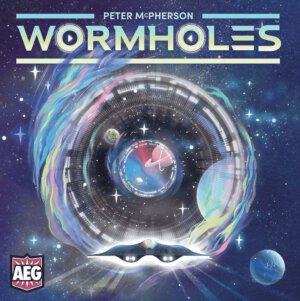 AEG will be releasing the new science fiction board game Wormholes this summer. In the game, designed by Peter McPherson, players will captain starship captains attempting to transport passengers across galaxy using wormhole technology. Wormholes is for one to five players, ages 14+, plays in around 45 to 60 minutes, and will carry an MSRP of $49.99 when it arrives this July.

In a peaceful galaxy, a new technology has been invented: wormholes. They allow ships to warp from one point to another, and open up countless possibilities for commerce and travel. As the captain of a passenger spaceship newly equipped with a wormhole fabricator, you can make some serious space bucks by building a robust network of wormholes. Link the farthest reaches of space while delivering passengers to become the most successful captain in this golden age of spacefaring. It’s time to bend space and go fast.

Players collect passengers from planets, each of whom have specific destinations they aim to reach. However, this pick up and deliver can be quite different once you establish wormholes between different points of the galaxy. And like any good business, your service can be used by other players, at the cost of a few victory points.