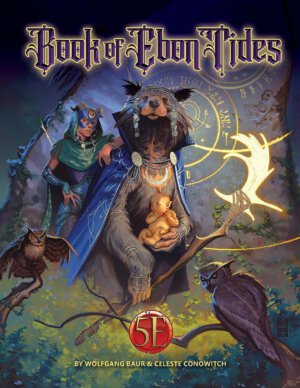 Kobold Press has launched a new Kickstarter to bring a new 5E sourcebook and adventure tome to the roleplaying masses. The Book of Ebon Tides project dives deeper into a world of the Fey known as the Shadow Plane. Available as well is an adventure supplement, Tales from the Shadows which includes 14 tales for levels one through eight. The project project has passed the XX funding mark and you can reserve physical copies of both the Book of Ebon Tides and Tales from the Shadows for a $78.00 pledge or get the two tomes in PDF for a $33.00 pledge through November 17. Expected delivery is July of next year.

A new setting expansion for 5th Edition campaigns, Book of Ebon Tides provides a complete guide to the people, places, heroes, magic, and monsters of the Plane of Shadow, a land where fey magic, illusion, and trickery are as potent as steel.

The Plane of Shadow exists beside the mortal world, one step beyond the veil—and  your heroes can enter this otherworldly realm of fey shadows, undead horrors, and wild adventure!

The Book of Ebon Tides provides a complete guide to the people, places, heroes, magic, and monsters of the Plane of Shadow, a land where fey magic, illusion, and trickery are as potent as steel.

From shadow goblins to ghouls, from elves to bearfolk, this is a world of mystery and enchantment. On the muddy black riverbanks and along alleys paved with bone, new heroes wander in the light of the moon, summon lunar devils, and battle in crumbling castles.

Come explore a shadow world next door to every other, just one step down the shadow road. . . .

The accompanying Tales from the Shadows offers 14 elegant adventures set in the Shadow Realm, taking your heroes from levels 1 to 8 as they explore this otherworldly region of fey shadows, undead horrors, and wild adventure!