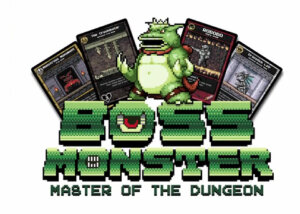 You say you wax nostalgic for those eight bit graphic dungeon delves of yesteryear? Would you like to bring the feel of classic side scrolling console games to your table top? Then you might want to swing over to Kickstarter and check out Boss Monster from Brotherwise Games. Boss Monster brings the retro look of old school console gaming into the 21st century while providing players the opportunity to play as the biggest baddie in the dungeon looking to make mincemeat out of hapless adventurers!

Boss Monster is a standalone card game that challenges 2-4 players to become videogame-style villains and build deadly side-scrolling dungeons. Players compete to see who can lure and destroy the most adventurers. But beware! You must make your dungeon as deadly as it is attractive, or the puny adventurers might kill you first! Are you a bad enough dude to become the ultimate Boss Monster? 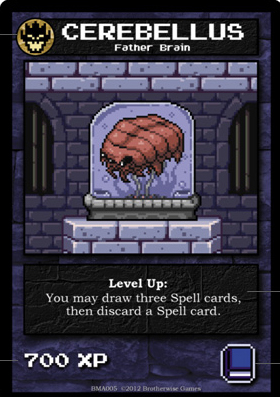 Boss Monster is designed for anyone who loves classic gaming, from OD&D to NES. The artwork, by talented pixel artists like Katrina Guillermo (Super Apartment Bros) and Kyle Merritt (EvoCreo) is richly detailed and full of geeky pop-culture references. From the game’s mechanics to its colorful characters, it combines the best of modern hobby gaming with a potent dose of nostalgia.

Boss Monster was created by Johnny and Chris O’Neal, two brothers who have founded Brotherwise Games to share their lifelong love of gaming. But to launch Boss Monster and fund a premium-quality print run with Panda Games Manufacturing (Summoner Wars, The Walking Dead Board Game, Pandemic), Johnny and Chris need your support!

We can only print Boss Monster if we can achieve enough pre-orders to hit our $12,000 funding goal. The basic $20 pledge level gets you the full game (with free shipping in the U.S.) – less than we expect the game to cost at retail! Higher pledge levels let you unlock awesome rewards like bonus cards or the chance to put yourself in the game. As with any Kickstarter project, you’re only charged if we hit our funding goal. And with your help, we can!