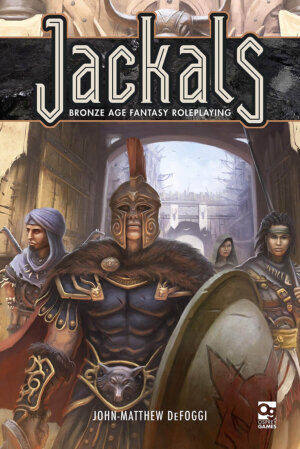 Osprey Games has released a new roleplaying game with an ancient historical feel. Jackals: Bronze Age Fantasy Roleplaying, written by John-Matthew DeFoggi, is inspired by the ancient world of both myth and reality. The 274 page hardcover carries an MSRP of $35.00 or grab the PDF at DriveThruRPG for $24.00.

The Zaharets, the land between the Vori Wastes and the Plains of Aeco, is well-known as the Land of Risings. Dominated by the rising city-states of Ameena Noani and Sentem, facing each other along the great War Road, the Zaharets has always been home to powerful civilizations. Beastmen ruins dot the landscape, a constant reminder of the Kingdom of Sin and the fragility of the Law of Men. Even older are the great ruins of the Hulathi, the legendary sea peoples, and the Hannic mansions sealed beneath the mountains, awaiting those who would seek out the Lost Folk. Scars abound from the wars between ruined Keta in the north and Gerwa in the south. And, far to the east, the legends of Muadah still beckon occultists and Jackals who seek to plunder its corrupted ruins.

Inspired by the myths, cultures, and history of the Ancient Near East, and by such ancient texts as the Iliad, the Epic of Gilgamesh, and the Old Testament, Jackals is a Sword & Sorcery roleplaying game set in a Fantasy Bronze Age. With mechanics based on the popular OpenQuest system, the game places players in the role of Jackals – adventurers, explorers, sellswords, and scavengers – and sends them out into the peril-filled land of the Zaharets to make their fortune… or perhaps fulfill a greater destiny…