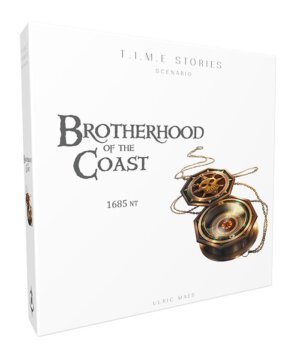 Asmodee has revealed the latest expansion for T.I.M.E. Stories will arrive sometime in Q3 2018. Brotherhood of the Coast will send the player agents back to the Golden Age of Piracy as they look to right the timeline of 1685. Obviously, you’ll need to have the core game to use the expansion which is for two to four players, ages 10+, and play in somewhere in the neighborhood of 90-240 minutes. No word yet on an exact release date or MSRP.

Agents, glad to see you all made it back from Hollywood in one piece. Come in, come in, take your seats. The Agency has gathered ample information to provide you with an introductory brief of your next assignment. We’ve nicknamed your next mission Brotherhood of the Coast.

Up until now, we know you’ve seen quite a bit. The horrors you faced in Estrella Drive were almost unspeakable. But you’ve proven yourselves capable of handling quite nearly anything—which is why we know you’re up to this next assignment. Now let’s get to the good part: you’ll be traveling to the year 1685, crossing the high seas of the Caribbean during the Golden Age of piracy. I hope one of you knows how to sail… 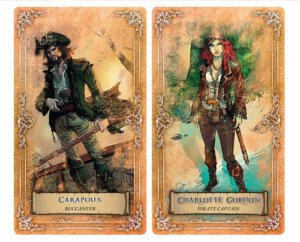 We’ve tried to keep this blunder under wraps, but the situation has gone beyond our control, which is the exact reason we’re sending you, agents. Some time ago, four seasoned agents, just like yourselves, were sent to this timeline. Unfortunately, something went awry, and we’ve lost their trace. It’s up to you to track them down and… release them from their receptacles. More details on that at a later date. We’ve seen the way you handle yourselves in the field, and believe you possess the exact skills we need to bring these agents home.

If you take a look at the images above, we’ve displayed some of the available receptacles you may take control of on this mission. Carapoux is a gun slinging buccaneer who doesn’t believe in vegetables. He will prove very useful in disposing of enemies with his quick drawing and deadly accuracy with his pistols. Charlotte Gordon, a ruthless pirate captain, is a vessel which, with her presence alone, will turn the tide of any naval battle with ease.

That’s all the information we have for you at the current moment, agents. We’ll be sure to update you with more details and information as your mission launch gets nearer.