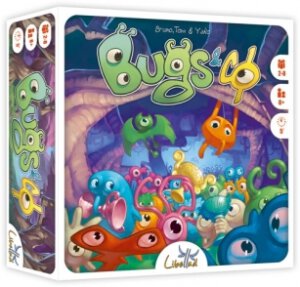 Collect as many identical monsters as possible in the shortest possible time! Shuffle the little creature tiles, discard 7 of them at random, and put the rest face down on the table. Set out the Trophy tiles face up alongside the monsters. Three, two, one… everybody plays!

The players turn over the tiles with one hand, then either transfer them face down to their hand or turn them back over on the table. Careful; you’re not allowed to return a tile from your hand or look at them again. You will need, therefore, to memorise the beasties in your hand as you capture them. But many of the monsters look rather similar and in the general confusion it will be easy to confuse them. Even more so given that players can return unwanted tiles to wherever they like on the table! As soon as you think that you’ve got as many families of 3 identical critters as possible, take the Trophy token with the highest value.

You must then wait until all the other players have finished. Then comes the scoring. Each family of 3 identical tiles scores 3 points, each tile that doesn’t complete a family loses you a point, and each Trophy scores the number of points shown on the tile. The player with the most points wins!”

Bugs & Co was developed with the help of the creators of Jungle Speed.