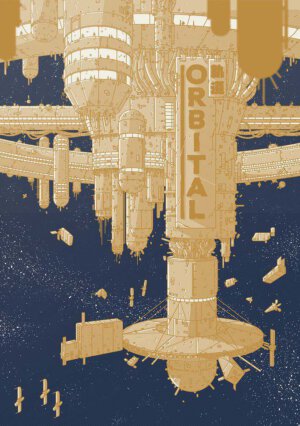 Mouse Hole Press has released an interesting looking storytelling RPG. In ORBITAL players will create a space station, where their characters reside, caught in the midst of an interstellar war. The 28 page Orbital is available in PDF, including an MP3 soundtrack for $12.00 or in print as an A5 digest sized book for approximately $18.00 (which includes the PDF and soundtrack).

ORBITAL gives us airlocks and control panels, pensive faces looking out into the cosmos, improvised fixes for critical systems, military-sponsored subterfuge, warm embraces in the cold vacuum, frantic struggles in zero-gravity and unknowable ancient technology, asking WHAT DO YOU DO NEXT?

Imagine an all-consuming interstellar war, spread across a vast galaxy and involving trillions of willing and conscripted participants. Then imagine a lone space station, floating in the cosmos, that is somehow set apart from this conflict.

Through significant effort and fortuitous circumstance this place has remained unaffiliated and relatively peaceful, providing a sanctuary for the lovers and thinkers who refuse to side with the two warring powers.

But this hard-won neutrality is not secure, not even slightly. There’s always someone offering vital resources in exchange for a little influence, or plotting to displace our leaders, or smuggling military equipment into forgotten corners of the station.

Holding off these myriad threats is an informal network of dependable sorts, each with a stake in the continuing vitality of the station. These characters; politicos, artisans, brokers and so on, may not be officially recognised leaders—but their influence is felt strongly across the community.

They might not get along — they might not even like each other. But they are united by their belief that the station is a cherished place that must be protected. The question is: when the pressure is rising, can they put their differences & personal motivations aside for the good of the community?