Bullet♥︎ Arrives in May from Level 99

This Spring will see the release of a new action puzzle game from Level 99. Bullet♥︎, designed by Joshua Van Laningham, takes the players into the far future as female Earth defenders fighting the forces of evil. The game is for one to four players, ages 13+, plays in 10 to 20 minutes, and will carry an MSRP of $39.99 when it hits stores in May. A limited deluxe edition is available directly from Level 99 for $59.99.

In Bullet♥︎, players take on the role of heroines in a far-flung future Earth and use their incredible powers to defend the Earth from evil — as well as from one another! Each heroine’s powers manifest in a different form, with players controlling sound, paper, technology, gravity, triangles, and more!

Turns are simultaneous. Place bullets in your sight, with the color of bullet determining the column and the number how far down in that column it is placed. Use actions to manipulate bullets to form configurations matching your patterns. Using a pattern removes bullets from your sight and sends them to the opponent. When placing bullets, you skip over existing bullets in the column you place it in, with the bullet hitting you if it is placed off your sight. At the end of the turn, you’ll gain even more bullets from the center bag as well as what the opponent sent, ensuring each new turn is more hectic than the last!

Choosing what order to place bullets, use actions, and use patterns in is key to staying alive as long as possible! Playing with the optional timer makes for even more intense play!

Jeff McAleer
Founder/Editor-in-chief of The Gaming Gang website and host of The Gaming Gang Dispatch and other TGG media, Jeff tackles any and all sorts of games but has a special fondness for strategy, conflict sims, and roleplaying games. Plus, he's certainly never at a loss for an opinion...
Latest posts by Jeff McAleer (see all)
Tags: Bullet Heart, Joshua Van Laningham, Level 99 Games 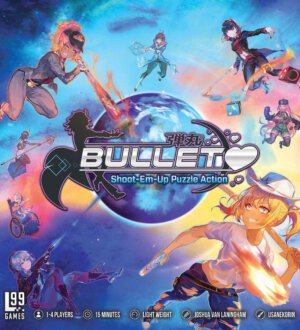 Bullet♥︎ Arrives in May from Level 99