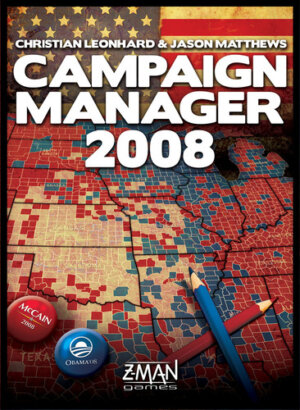 In the 2-Player category, the award goes to Campaign Manager 2008, designed by the team of Christian Leonhard and Jason Matthews and published by Z-Man Games.   Players assume the roles of the political campaign mangers in the 2008 presidential election.  The players struggle to influence voters in the critical swing states from this election, while targeting key constituencies and trying to define the key issues in the states. Will McCain dominate the national security debate, or can Obama play on people’s fears over the economy? As the campaign manager of a national presidential campaign, you will either identify the road to the White House, or the road to irrelevance.  Leonhard and Matthews earned the IGA in 2008 for 1960: The Making of the President, while Matthews also captured the award in 2006 with Twilight Struggle.  This is the third IGA for Z-Man Games.