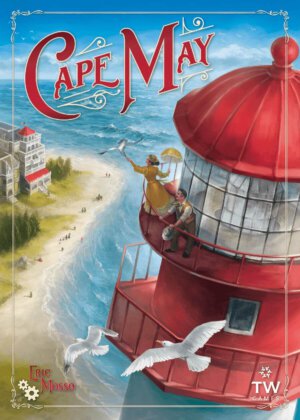 This Spring will see the release of an interesting looking resort building game from Thunderworks Games. In Cape May, designed by Eric Mosso, players will look to build and expand the famed New Jersey vacation getaway. The game is for one to four players, ages 14+, plays in one to two hours, and will carry an MSRP of $59.99 when it arrives in June.

America’s oldest seaside resort, Cape May, New Jersey, has been a popular getaway for families from New York City, Philadelphia, and Washington, D.C. since the late 1700s. But Cape May was never immune to hardship. Wracked by devastating fires, extreme beach erosion, swarms of mosquitoes, and intense competition from surrounding areas, the town and its residents struggled their way through the 19th and 20th centuries. During this turbulent time, players attempt to develop Cape May into the “Queen of the Seaside Resorts.”

In Cape May, players traverse the city streets as entrepreneurs, developing property while building wealth over four seasons to earn prestige.

Build cottages, develop them into Victorian homes, and upgrade them into historic landmarks. Establish shops and grow them into profitable businesses. Carefully move around the city, and make strategic use of activity cards.

Complete bonus goals, then take some time to relax and spot wildlife in the best place for birdwatching in the Northeastern United States.

Whoever best balances their income, development, movement, and personal goals will go down in history as the most successful developer of Cape May!