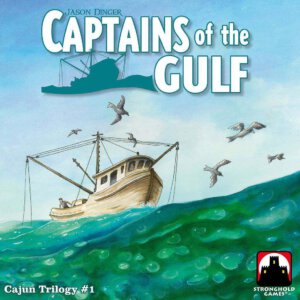 Stronghold Games will be releasing a second edition of the Cajun fishing game Captains of the Gulf. In the game, designed by Jason Dinger, each player commands a fishing boat as they take to the seas in search of profit. The game is for two to four players, ages 12+, plays in 75 to 120 minutes, and will carry an MSRP of $69.99 when it arrives August 11th.

South Louisiana has a long, rich history of delicious Cajun dishes like gumbos and jambalayas. A big part of what makes these meals so great is the seafood in them that is fished from the Gulf of Mexico. The men and women who run the shrimp boats that fish that seafood have to be both hardworking and crafty, finding the optimum strategy to bring in the best catch. They are the Captains of the Gulf.

Captains of the Gulf is a thematic action-selection game, full of flavor. Each player operates a fishing boat in the Gulf of Mexico, hoping to make the largest profit over eight game turns. The players try to upgrade their fishing boats, add crew members, and then move out to fish crabs, oysters, and shrimp, after which they need to deliver them to ports.

Cards are multi-purpose; they are added to a player’s mat on top (licenses), at the left side (crew), or at the right side (boat upgrade). Moreover, when you fish you need to play them out of your hand.