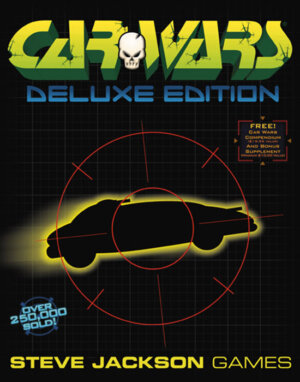 As reported during my interview with Andrew Hackard and Phil Reed of Steve Jackson Games, SJG is going to produce Car Wars next year. This was certainly a great thing to hear as I can say the title was one of the games Elliott, our friends, and I played quite a bit in high school. No word specifically if this will be another Kickstarter project, what will be included in the game, or if we will see a major reworking of the game’s mechanics.

I understand not all that long ago SJG made an attempt to reintroduce the classic to new gamers with rather lackluster (to say the least) sales numbers. The reasons behind this are many but, in my opinion, four issues really stood out that led to an overall failure to the relaunch:

1. Prebuilt Vehicles – One of the biggest appeals of Car Wars was the ability to custom create just about any sort of vehicle your imagination could concoct. As long as you had your chassis, power plant, and amount of money to be spent you knew what you could put together as a load out. When Car Wars was reimagined ten years ago and released as division sets with a handful of predesigned vehicles much of the fun of prepping for a game went right out the window. Granted the SJG website has some rules for designing your own cars but it just isn’t the same.

2. Major Clunk in the Trunk – When Car Wars hit the scene in a little zip lock bag back in my freshman year of high school (1981) there was nothing like it on the gaming market. Overall this was an era when friends got together to play a single game for hours and although you could never say CW was the quickest game around it still moved at a good enough clip to keep everyone entertained. As new supplements came out that began to add more and more types of vehicles like semis, boats, aircraft, and so forth more and more rules were added to the game which lead to making the title nearly unplayable. The 2002 streamlined much of the game play and put the focus back on auto combat but much of the clunkiness remained.

3. Minimal Backstory – Car Wars is about a fairly dystopian future with a good deal of the films Death Race 2000, Mad Max, and even Soylent Green jumbled into the mix. The old Autoduel Quarterlies used to come out and, amazingly enough, we actually read the stories! A lot of the fun was playing in this big bad world where Theme didn’t really come to the forefront in the fifth edition and CW suffered greatly for it. 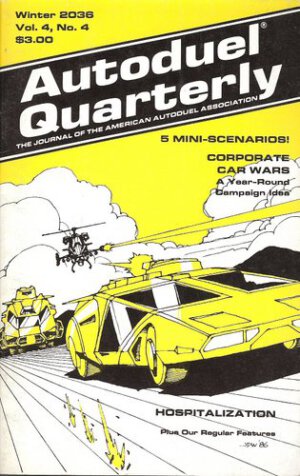 4. Lack of Support – This may surprise some folks as SJG actually released nine different sets for the fifth edition. Even with that many in the series the impression a lot of gamers (including myself) got was SJG didn’t have their heart in tackling Car Wars and, although I’m sure everyone behind that edition was trying, the system was on the backburner and never a product that would receive first tier treatment.

A. Overhaul the Mechanics – Obviously much easier said than done but from the start Car Wars never seemed to scale correctly. The setting is one of televised arena duels and highway mayhem but if you were to seriously calculate the amount of game time these battles took up, you’d be looking at around ten to twelve seconds and the vehicles would have traveled maybe a couple of hundred yards. “Thanks for coming to the arena. I hope you feel you got your money’s worth from the three and a half minutes of action we packed onto tonight’s card…”

The combat and damage resolution work and we never saw any issues with those but the movement and time scale have to be revamped. There are a few racing or vehicle combat games on the market which provide an impression of actual racing or at least of your car traversing more than a couple of football fields during a game. Sadly enough these games t’ain’t Car Wars folks but if the new edition wants to take the checkered flag major changes in the movement mechanics must be addressed. I can’t be the only gamer who never saw a player in Car Wars finish more than a lap during a racing scenario.

B. Keep it Simple – By this I don’t mean the game has to be dummied down to the point where it barely resembles the classic we know and love. On one hand I’m talking about making the system accessible enough where gamers who have never played won’t be overwhelmed while at the same time shooting for the ability of six or eight players to realistically finish a good solid game in under three hours. 2013 isn’t 1983 and people don’t have the same time to invest in playing a single title with friends as we did in the past. This isn’t to say I want to see a filler game here but I still remember the days of eight hour CW events where, with only nine or ten players, we still didn’t have a clear winner when it was time to call it a day.

C. Stay Focused – I don’t expect everything and the kitchen sink to be included in the new edition of CW nor do I want to see it. I’d like to see a less is more philosophy taken where we possibly only have autos and motorcycles with other less common vehicles tackled later. Give us loads of chassis and weapons and goodies of destruction to let us go to town but don’t let the playablity suffer due to an overemphasis on wowing us with accessories or shiny components. Personally, if we can get some interesting arena tiles and highway pieces I’ll be happy at that. 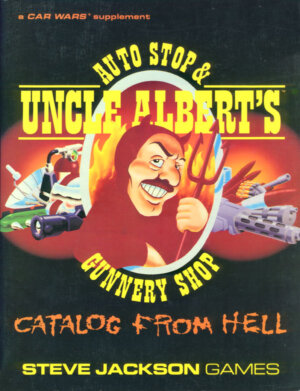 D. Theme it Up – As I mentioned previously Car Wars was heavy on theme and I’d love to see that return. We all have that moment when someone cuts us off in traffic when the thought of opening up with twin mounted machine guns flash through our minds; hell, I used to have a friend who would jokingly say, “Give me missile lock,” whenever some other driver pulled some reckless move. This is probably hardwired in our DNA somehow and Car Wars let us play off our little fantasies of blowing cars off the road. along with this was a very strong RPG flavor to the game as well as there were a variety of supplements which came out that were almost along the lines of campaigns where your group was trying to deliver some critically needed supply somewhere or protecting a town from a biker gang. Who knows, maybe you were the biker gang? Of course these are the sorts of things we should hope to see once Car Wars returns but the ground work for these kinds of adventures needs to be there from the start.

Obviously, no one outside the halls of Steve Jackson Games knows what they have up their sleeves for the 2013 Car Wars release and I’m just sharing my thoughts. I’m not even sure what the company has planned for Ogre once the Designer’s Edition comes out as that could simply be a one and done – although I doubt it following the huge numbers the Kickstarter brought in – and I honestly have no idea what changes were made to the mechanics of the game since I haven’t played the upcoming release. Yet for all the excitement and, let’s be honest, revenue Ogre has generated for SJG Car Wars done right (or at least moving the system in the right direction) will make those Ogre numbers look like a drop in the bucket.

At the end of the day, even if SJG simply releases something that is along the same lines as the Deluxe edition from years back I’m still going to buy it. I really will but mainly for the nostalgia factor more than anything else. Because, truth be told, if you stripped away all the theme and tinsel from Car Wars and left only the mechanics? It really isn’t a great game. Seriously it isn’t as it moves at a snail’s pace, scales poorly, clunks along mechanically, and simply doesn’t play smoothly. Yet looking back through the rose colored glasses of memories to the afternoons in some pal’s basement, blowing the hell out of each other, we had a blast. I can only hope SJG takes an approach to the new edition which will lead a whole new generation of gamers to create those same kinds of memories.

As I’ve said a few times on the show, if Steve Jackson Games does Car Wars right? It’ll be like printing money!