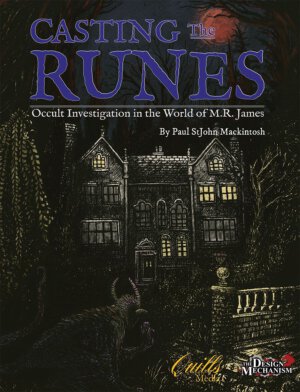 A new roleplaying game has arrived from The Design Mechanism inspired by the ghost stories of M.R. James. Casting the Runes is based on the Gumshoe system and includes all you need to play, including two adventures. You can score the 200 page B&W hardcover and PDF for $34.99 at DriveThruRPG or score the PDF alone for $17.99.

Casting the Runes is a roleplaying game based on the works of M.R. James, the father of the modern British ghost story, and uses the GUMSHOE system for investigative RPGs. The unique character of James’s stories, and his own personality, inspire the game.

Player-characters ( “Investigators”, under the guidance of the Game Master, proceed step by step to unearth the unearthly, researching the uncanny, the sinister, and the supernatural, against the backdrop of Edwardian Britain. Adventures are based on the classic ghost story, replete with “malevolence and terror, the glare of evil faces, ‘the stony grin of unearthly malice,’ pursuing forms in darkness, and ‘long-drawn, distant screams.’

Step back in time, and into a shadowy world , where demons are real, malevolent ghosts stalk the unwitting, and urbane, educated sorcerers pursue hideous knowledge in their bid to Cast the Runes…

Casting the Runes is a complete roleplaying game, and needs only some six sided dice, a few friends, and a willingness to explore the shadowy corners of the Edwardian Era. This book has everything else you need to create Edwardian Investigators, learn about and compellingly convey the Edwardian Period, structure occult investigations, and present the supernatural. It includes two introductory scenarios: The Coptic Lamp and The House With the Brick Kiln, so you can begin your investigations without delay.