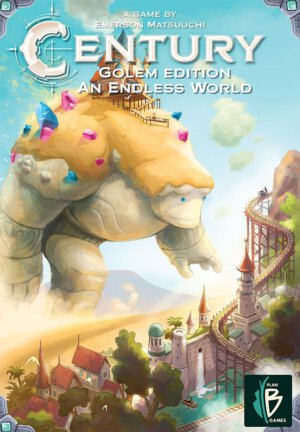 Plan B Games has revealed the final entry in the Century: Golem series of board games will arrive later this year. Century: Golem Edition – An Endless World will allow players to explore a new region of the world of Carvania while also including rules for four unique games. The game is for two to four players, ages 8+, plays in 30 to 45 minutes, and will carry an MSRP of $39.99 hwen it arrives in Q4.

Century: Golem Edition – An Endless World brings crystal traders face to face with primordial golems predating human existence. These golems are incredibly powerful and ever eager to assist. As the world continues to unfold itself to players, you will discover how endless the fun will be!

Explore and develop a new region of the world of Carvania in Century: Golem – An Endless World, the third game of the Golem saga! Players serve as settlers seeking a new life and adventures in an unexplored region.  Century Golem: An Endless World concludes the trilogy of the cult hit Century: Golem edition with rules for 4 different games.

The Village: Big Box to Arrive in Early 2023 from Plan B Games

Pathfinder: Secrets of Magic Reviewed on The Gaming Gang Dispatch #691