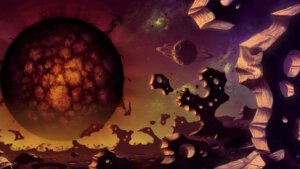 A new adventure supplement for the gonzo science fantasy Cha’alt RPG setting is up for crowdfunding for Kort’thalis Publishing. Cha’alt: Fuchsia Malaise features more background material unlocking many more mysteries of the game world as well as introduces a story line of a human population enslaved by an addiction to the drug xanthium-183. The project is already fully funded and you can reserve a copy of the supplement as a PDF for a $10.00 pledge or scoer the physical book and PDF for a $30.00 pledge through January 11th. Expected delivery of the PDF is June of next year with the physical book to follow in October.

So, what’s the meaning behind “fuchsia malaise”? After the apocalypse all but wiped civilization from the face of Cha’alt, humanoids entered the squalid rat-eating phase.  Then zoth was discovered – a miracle substance 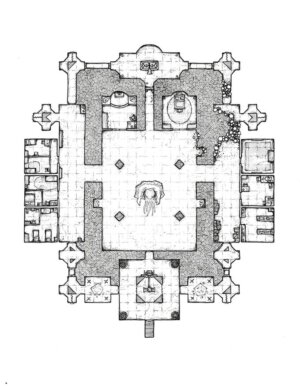 worth a King’s ransom in small quantities.  As species from other planets and dimensions visited Cha’alt, people reached an equilibrium of prosperity what with all the golden age high-tech and magic resurfacing.  But soon enough, the Cha’altian races were exploited – that optimism and zeal turned to boredom, aimlessness, and angst.  Zoth-sucking machines were outlawed in favor of “manual” mining and refining the substance by hand.

An existential crisis simmered below the surface as the people became forced laborers, their free time spent on a recreational drug traded to them by off-worlders in exchange for zoth, after being refined into the spice mela’anj in the many factories across S’kbah. This drug, xanthium-183, is known to many on Cha’alt as fuchsia malaise because of its lethargic effect upon the planet’s humanoid population. Those imbibing it stare up at the fuchsia sky for hours at a time, mesmerized, until forced to mine zoth after running out of their precious drug.

A desperate band of freedom fighters might be able to stop all this, striking the nerve center of alien control known as Elysium.  Aside from planetary surveillance and housing a contingent of military troops, that’s where xanthium-183 is manufactured.  Destroying Elysium will cripple off-worlder subjugation, releasing the people of Cha’alt from slavery via mind-numbing addiction.

Will you be among those who stave off fuchsia malaise, or perhaps you’re adventuring party is full of cunning, amoral opportunists looking for a quick score?