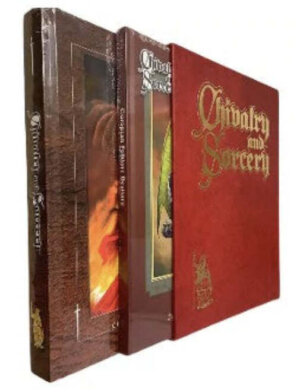 With all the medieval flavour that was loved of earlier editions now back, this truly is the definitive edition of Chivalry and Sorcery. Players can create well-rounded characters who really feel like they belong to their world. Knights wield secular power and command the battlefield, while other warriors strive to win their spurs in combat and rise to join their ranks. Magick is deep and mysterious, drawing on real-world historical detail, while Priests utter prayers and call upon the very miracles of their gods! You decide the level of magic and fantasy for your game. Run a medieval high fantasy game filled with magic, miracles and myth, – or one of gritty, low fantasy, or even pure historical simulation. The choice is yours! From fairy-tale romance to courtly love, from religious intrigue to brutal, bloody battle, Chivalry & Sorcery lets you play in just the Middle Ages you want.

The Folklore Bestiary continues the mission of Chivalry & Sorcery to provide a fantasy roleplaying experience with an authentic medieval flavor.

Drawn from legends and lore across western Europe, this book presents more than sixty magical and monstrous creatures that fit perfectly in a medieval fantasy setting – because the people of the Middle Ages believed that they existed!

Some are harmless – beyond a few pranks – and some are terrifying beasts that can threaten whole cities. Some will be familiar, but many are presented for fantasy games for the first time ever. A bibliography featuring online resources as well as books allows you to pursue the tales behind these monsters, finding inspiration for encounters and even for full adventures. The Folklore Bestiary supplements the Chivalry & Sorcery 5th Edition Core rulebook and gives you endless potential for adventure.

More than 60 monsters from across the world as medieval Europeans knew it.

Multiple variants for many creatures.

The 5th Edition of Chivalry & Sorcery has Arrived