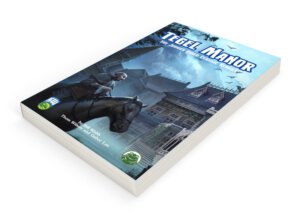 A real classic from the very early days of fantasy RPGs is getting a deluxe revamp and ton of new polish from Frog God Games. Tegel Manor arrived on the scene, from Judges Guild, back in 1977 and was one of the first truly meaty and detailed Dungeons & Dragons adventures from a third party company. A Kickstarter just launched (and is already over 200% funded) for what looks to me like a really stunning return to the venerable haunted mansion. You can reserve a copy of the PDF, plus all unlocked stretch goals, for either 5E Dungeons & Dragons or OSR Swords and Wizardry for a $25.00 pledge. You can also snag the physical hardcover book, PDF, and stretch goals for either system for a $50.00 pledge. The project runs through through December 23rd with an expected delivery of August 2019.

Ever wonder how Frog God Games got its name? Of course we have to credit Clark Ashton Smith…but our roleplaying roots lie in Tegel Manor.

First published in 1977, Tegel Manor is the oldest of “Haunted House” adventures in fantasy roleplaying, and probably the very first megadungeon ever published. The Manor is a sprawling edifice of 250+ rooms filled with tricks, traps, puzzles, monsters, and situations both humorous and horrific. The huge manor house has been the curse of its owners, the Rump family, for generations – no matter how many times they have tried to get rid of it, the ownership manages to come back to them. 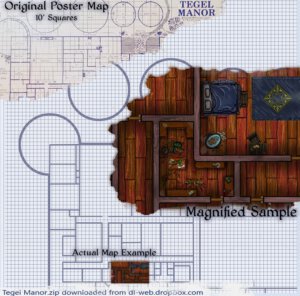 This intertwined and sinister relationship between the house and its chosen family is a history of horror, evil, and greed. There is a lot for the characters to learn about the curse, and their knowledge might just keep them alive long enough to tell the tale.

If you’ve already seen the 1977 version of the Manor, there’s a lot more for you to learn in this updated and expanded 5E version of the classic. This printing contains expanded descriptions of the rooms, new areas, new monsters, new magic items, and much more, all with spectacular color illustrations.

In addition to the Manor itself, this book contains: