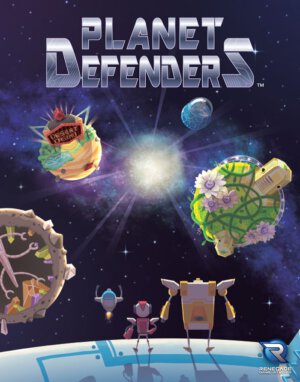 Another day another Renegade Game Studios news piece! December 13th will be a great day for gamers because not only is Kepler-3042 hitting stores so is Planet Defenders. Whereas Kepler-3042 strikes me as a meaty strategy science fiction game, Planet Defenders is a lighter and more lighthearted family SF title. Guide your defenders to clean up loads of discarded robots as they look to make the space lanes safe. Planet Defenders arrives on December 13, is for two to four players, ages ten and up, plays in between 30-60 minutes, and carries an MSRP of $45.00.

In Planet Defenders, players pay batteries to control the three defenders, moving them among the planets and collecting energies. Players can enhance their actions by spending energies or batteries to upgrade their technology. They earn the research points by catching the disposed robots in outer space and by collecting technology cards.

When robots from two different piles are depleted, complete the current round so that all players have an equal number of turns. The player with the most points wins.