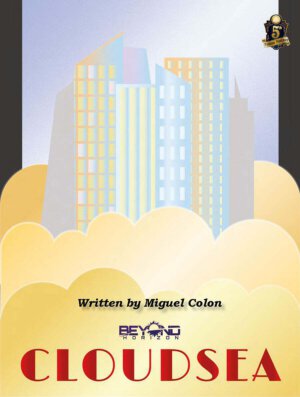 An interesting looking 5E based dystopian RPG, Cloudsea, has arrived from Beyond the Horizon. Take your adventuring to the skies and a trio of battling floating cities. You can score the 150 page Cloudsea 5E in softcover (with PDF) at DriveThruRPG for $29.95 or grab the PDF alone for $13.95.

Two-thousand years after the world was covered in a mysterious fog now known as the Cloudsea, killing nearly everything on the planet with its radiation, society has recovered due to the ingenuity of those who saw the end coming: the gnomes, who built the massive sky-cities which people live on today, the humans, who were gifted with the foresight of tragedy in the first place, and the ratfolk, ingenious workers who know how to make the best out of any bad situation. After reaching the skies, they met the mysterious nimbus nymphs who lived in the clouds and due to magical and technological advancements, were able to build the android race in order to be subservient to the other four.

But there was trouble brewing between the sky-cities. The androids were not mindless machines, but sentient, which caused the creators on the sky-city of Hydra to be shunned by the other two sky-cities for not meeting the bottom line and creating automated servants, but living people. Now with resources growing thin, Hydra is becoming more and more warlike by sending out pirates to scavenge what the other sky-cities attempt to mine from the tops of mountains, while war is a sad fact of life for those living in the sky-cities.

Diving into the Cloudsea has become the most profitable job within the sky cities, besides piracy, and though dangerous, many are drawn to the wealth they can garner from it. But even so, war looms around every corner, and there are many players in the game who would love to see nothing more than absolute tyranny reign over the sky-cities or anarchy rule the streets.

Cloudsea is a dystopian Roaring 20s inspired setting primer that includes the history of the three sky-cities, Dragon, Phoenix, and Hydra. Also contained within these pages are racial write-ups for the five core races of the setting, and rules regarding the radioactive Cloudsea itself, as well as rules for airplanes, constructs with trapped elemental beings inside, to utilize as vehicles. But be wary of what you read! This book is narrated by the Minister of Truth of the sky-city of Dragon herself,  Inari Sam, a gnome at the upper echelons of society, and she may not be the most reliable source of information nor the most moral of people… Needless to say, supporting a brutal dictatorship that suppresses both free speech and the real history of events makes one a pretty terrible person.

Within this book you’ll find:

Welcome to the Cloudsea, where everyone’s a winner. Unless you’re one of the unlucky ones that is.