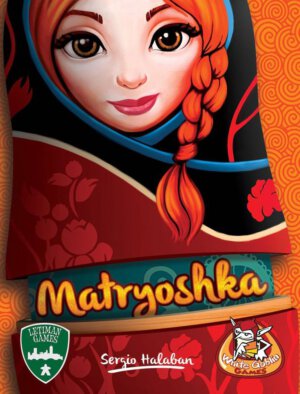 Letiman Games and White Goblin Games will be releasing Matryoshka later this month. In the game, players will take on the role of doll collectors as they aim to emerge at the end with the most valuable collection. Matryoshka is for three to five players, ages 8+, and plays in around 20 minutes. The basic edition of the game will carry an MSRP of $16.00 while a deluxe edition will be available for an MSRP $25.00 when they arrive on January 30th.

Some rare Matryoshkas composed of seven dolls each were spread during the years and ended up distributed randomly among some antique collectors. These collectors arranged a meeting to exchange dolls and try to reassemble the rare Matryoshkas. Obviously each collector wants to leave this meeting with the most valuable collection. But who will succeed?

Matryoshka is played in four rounds. In each round, each player shows a Matryoshka from his hand and all other players make a hidden trade offer. After checking all offers, the player trades his card with another player.

At the end of each round, players must show a part of their collection by placing Matroyshkas on front of them. That way other players know what they’re looking for. The player with the most valuable collection at the end of the game wins.