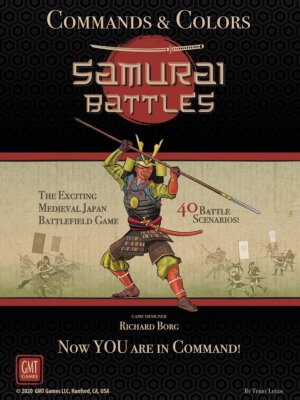 This February GMT Games will be releasing Commands & Colors: Samurai Battles, a revamped new edition of the Zvezda classic. The game, designed by Richard Borg. is jam packed with scenarios across the breadth of the early samurai era of Japan. The game is for two players, ages 12+, plays in 60 minutes or more (depending on the scenario), and is available at the P500 price of $55.00. The MSRP will be $82.00.

Samurai Battles, from the game company Zvezda, premiered almost seven years ago. And although the game achieved some popularity for the most part the game flew under the radar of most gamers. Perhaps the blame was with the time required to assemble the 100 plus plastic Samurai figures before one could even play the game. And once assembled these plastic models, although truly fine figures, were very fragile, almost too fragile for game pieces. Finally when it was time to pack up after a game, it was extremely difficult to store them away safely.

Yet, the Samurai Battles game still gained a small following of very loyal fans. I tend to believe, many fans who were already familiar with one or more of other games that use the Commands & Colors system; Battle Cry, Memoir ’44, Commands & Colors Ancients, or Commands & Colors Napoleonics, actually brought them to the game. But after a couple of years of dwindling sales and the untimely death of Zvezda CEO Konstantin Krivenko, who was very supportive of the project, the game was phased out.

The Commands & Colors: Samurai Battles game rules allow players to portray important engagements of Japanese history. The battles, included in the scenario booklet, focus on the historical deployment of forces and important terrain features in scale with the game system. The scale of the game is flexible and varies from battle to battle. For some scenarios, an infantry unit may represent an entire clan of soldiers, while in other scenarios a unit may represent just a few brave warriors.

The Command cards drive movement and creates a “fog of war” and presents players with many interesting challenges and opportunities, while the battle dice resolve combat quickly and efficiently. The Honor & Fortune game mechanic will task players to maintain a balance between these two important game elements. The Dragon Cards add an element of suspense and surprise that can bend the rules and instantly change the course of a battle. The battlefield tactics you will need to execute to gain victory, however, conform remarkably well to the strengths and limitations of the various Japanese unit types, their weapons, battle terrain, and written history.