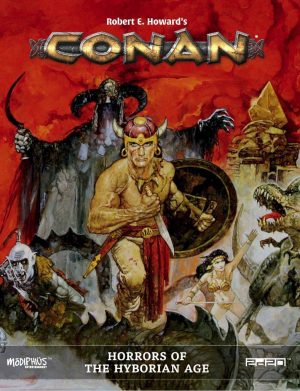 The latest supplement for the Modiphius Entertainment hot selling Robert E. Howard’s Conan: Adventures in an Age Undreamed Of is now available in PDF. Conan: Horrors of the Hyborean Age will catalog plenty of Howardian creepy crawlies while also including a fine mix of Lovecraftian terrors and original creatures as well; as a close correspondent of H.P. Lovecraft, Howard wrote a few stories which splashed around in the Cthulhu Mythos. You can snag the 120 page sourcebook for $14.99 from DriveThruRPG (of which The Gaming Gang is an affiliate) but, strangely enough, the PDF is two dollars less if you buy it directly from the Modiphius site. Sort of odd…

THOSE EYES GREW AND BECAME GIGANTIC, AND IN THEM THE CIMMERIAN GLIMPSED THE REALITY OF ALL THE ABYSMAL AND BLASPHEMOUS HORRORS THAT LURK IN THE OUTER DARKNESS OF FORMLESS VOIDS AND NIGHTED GULFS.

Horrors of the Hyborian Age is the definitive guide to the monstrous creatures inhabiting the dark tombs, ruined cities, forgotten grottos, dense jungles, and sinister forests of Conan’s world. This collection of beasts, monsters, undead, weird races, and mutants are ready to pit their savagery against the swords and bravery of the heroes of the Hyborian Age. 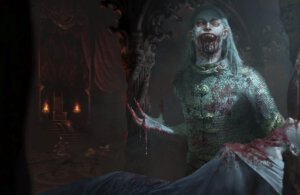 inextricably bound his Hyborian Age. Other entries are original, chosen carefully to reflect the tone and dangers of Conan’s world.