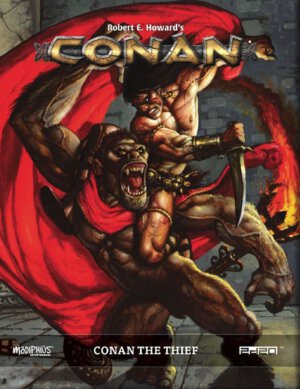 The first RPG source book for Robert E. Howard’s Conan: Adventures in an Age Undreamed Of is now available from Modiphius Entertainment. You may have caught my glowing review of the corebook and now we’ll get to dive into more gaming info detailing Conan’s career as a thief as well as running adventures focusing on thievery in the Hyborian Age with Conan the Thief. The 132 page book is out now at DriveThruRPG and carries an MSRP of $12.99. The print edition should be available later this summer.

TORCHES FLARED MURKILY ON THE REVELS IN THE MAUL, WHERE THE THIEVES OF THE EAST HELD CARNIVAL BY NIGHT. IN THE MAUL THEY COULD CAROUSE AND ROAR AS THEY LIKED, FOR HONEST PEOPLE SHUNNED THE QUARTERS, AND WATCHMEN, WELL PAID WITH STAINED COINS, DID NOT INTERFERE WITH THEIR SPORT…
Conan the Thief takes you into the dark underworld of the Hyborian Age. From the choked avenues of the most dangerous cities to the marbled corridors of the wealthiest palaces, master thieves and deadly assassins seek to make their fortunes, risking all in pursuit of gold, prestige, and respect.
Whatever it is you seek, fast hands and quicker wits can forge a legend.
Embark upon dangerous heists, avoiding traps, watchmen, hideous creatures, and fell sorceries in pursuit of treasures beyond your wildest dreams. Work alongside legendary thieves of Conan’s world, carrying out robberies worthy of their reputation, or work against them and take the riches of the world for yourself! Steal wealth beyond measure, avoid capture, and secure yourself a place in infamy!
This book requires the Robert E. Howard’s Conan: Adventures in an Age Undreamed Of corebook to use.
Tags
Conan the Thief Modiphius Entertainment Robert E. Howard's Conan Adventures in an Age Undreamed Of RPGs