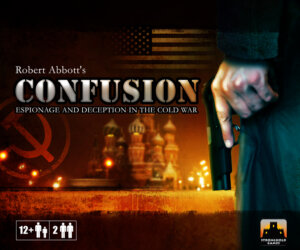 Congratulations to Stronghold Games for winning first place in MTV Geek’s “Top 10 Board Games of 2011”.

MTV Geek’s award to “Confusion: Espionage and Deception in the Cold War” comes on the heels of Games Magazine’s award for “Best Abstract” just a few weeks ago.

“Confusion: Espionage and Deception in the Cold War” takes players back to the early 1960s and the Cold War between the United States and the USSR. Each player takes on the role of their selected nation’s spy agency: the CIA or the KGB. Confusion is a game of deduction and area control, as you determine how to influence your Spies, control the global spy network, and deliver the Top Secret Briefcase to win the game!

At the start of a game of “Confusion”, players aren’t aware of the talents and skills their spies possess! Your opponent can see what your spies can do, but you cannot. Your job as a wise leader is to first deduce exactly how each of your spies move, then employ your knowledge by using each spy for maximum effect.

But be on alert, because your opponent has placed a double-agent in your team of spies!

The first player to take the Top Secret Briefcase from the middle of the board and deliver it to his opponent’s side of the board is the winner!