Wizards of the Coast will be releasing Conquest of Nerath, a new D&D universe based board game this June just in time for Origins.   Designed by Richard Baker, Mons Johnson, and Peter Lee for 2-4 players.  There isn’t a lot of info out there yet on this game, so here’s what Wizards has to say about it.

War has come to the Dungeons & Dragons world! In the north, the undead legions of the Dark Empire of Karkoth march against the fragile League of Nerath, determined to sweep away the human kingdoms forever. To the south, the infernal Iron Circle launches its own goblin hordes in a campaign of conquest against the elves and corsairs of Vailin. From the snowy expanse of the Winterbole Forest to the sun-warmed coasts of ancient Vailin, four great powers struggle for survival.

Muster armies of footsoldiers, siege engines, monsters, and dragons to attack your enemies. Fight across the waves with fleets of warships and raging elementals. Plunder ancient dungeons with bands of mighty heroes, searching for magical artifacts and awesome treasures that might tip the scales of battle in your favor. The fate of empires is in your hands!

This game includes the following components: 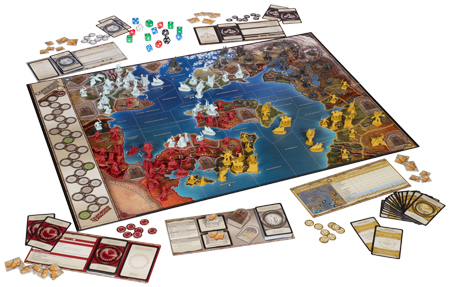