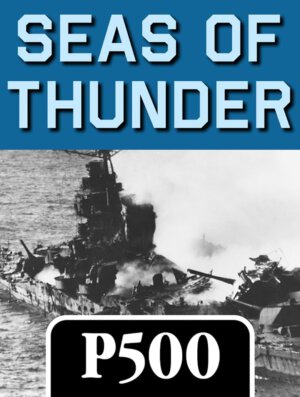 As someone who really enjoys naval wargames, a recent addition to the P500 listing from GMT Games caught my eye. In Seas of Thunder, players will lead their nation’s navies across a global stage while facing the same operational challenges as their historical counterparts. The game is for two to eight players, ages 14+, and carries a P500 price of $45.00 and will carry an expected MSRP of $65.00 is enough orders are placed.

World War 2 was the largest and most violent extended naval war in history. From September 1939 until the surrender of Japan, the high seas were a global battle zone filled with mighty battleships, nimble cruisers, silent hunters, and flat-tops bristling with planes. Before our eyes, we witnessed the changing of warfare on the high seas as the thunderous old guard fell to air power and submarines Raiders prowled the open waters and the carrier showed its true diversity and adaptability.

Seas of Thunder not only allows players to re-create the Atlantic or Pacific theaters of the war but to see how challenging the entire picture was for their leaders. How do you protect a globe from German raiders? How desperate was it for Britain when France fell and they were left to fight Germany and Italy alone on the high seas? What is the right balance for the Soviet fleet split between for distinct fronts (Baltic, Black Sea, Arctic, and Pacific)? If the Mediterranean force weakens for the allies, where to they draw ships. from? Does Japan strike quickly or play for attrition when they arrive on the halfway point? Will America fight in two fronts, three, or four?

In Seas of Thunder, players will experience the tension of too much sea to cover with too few ships, the frustration of being caught unprepared, or the intensity of a vital stand contesting a high-value sea area. Victory is neither sudden nor guaranteed. In each battle, a flight of Catalinas, the lack of ASW, the improper distribution of air power, or even a missing minesweeper could be the difference between success or failure.