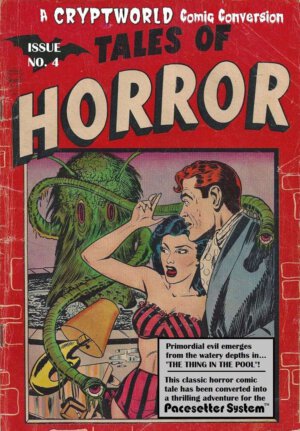 An interesting looking series of classic comic book horror tales, which are ported over to the Cryptworld roleplaying system, has a new release from Savage AfterWorld. The fourth issue of Creepy Comic Conversion tackles The Thing in the Pool from the September 1952 Tales of Terror. You can score the 22 page PDF for $.99.

Four people have suspiciously disappeared without a trace from a recently constructed house at 55 County Road 810 in Loomis, Connecticut. Sebastian Corday, the architect of the home; George and Ann Winsor, the new residents there; and Keeto Murillo, the groundskeeper of the residence, were last seen at the house a week ago. The players are tasked with investigating the grounds and determining the fate of the victims, but where could they have vanished to?

The “Creepy Comic Conversion” series brings those classic horror comics of the ‘50s and ‘60s back to life for the CRYPTWORLD roleplaying game! The front half of each zine presents an original terrifying tale from a long-forgotten classic horror comic. Then, in the back, you’ll find the story fully fleshed out and statted into a horrific adventure ready for a frightening evening of gaming!

“The Thing in the Pool” originally appeared in TALES OF HORROR, Sept. 1952, No. 2, by Minoan Publishing Corp. Scans provided courtesy of The Digital Comic Museum. This product refers to CRYPTWORLD and Pacesetter System. More information can be found at www.goblinoidgames.com and www.pacesetter.us. CRYPTWORLD, Pacesetter System, and associated text, logos, and trademarks are owned by Daniel Proctor. Used with permission under license.