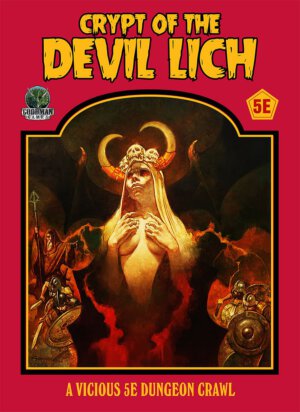 A Kickstarter project is currently running to fund a new edition of the tournament dungeon adventure Crypt of the Devil Lich. Goodman Games plans to release both a 5E and Dungeon Crawl Classics edition of the tale. The project is fully funded and you can reserve a copy of the adventure, for either 5E or DCC, in PDF for a $20.00 pledge or score the hardcover (including the PDF) for a $40.00 pledge through March 25th. Expected delivery of the digital products is this September with the hardcovers to follow in November.

An ancient prophecy sends your heroes into the crypt of the Devil Lich. They must destroy her, before she can return to power. Once inside, your heroes face horrors that could only be dreamt of by a mad half-drow half-fiend lich!

We invite you into the Crypt of the Devil Lich, the most vicious dungeon crawl since Tomb of Horrors!

Created in homage to Gygax’s classic with the goal of providing an even greater challenge, Crypt of the Devil Lich became an instant legend when it was first run as a tournament dungeon crawl. After all, this is the adventure with a mummy dragon, the hall of prophets, and a castle suspended by chains above a lava sea – not to mention a legendary villain!

Now, more than 15 years after its original Gen Con debut, we are updating it for the 5th edition and DCC rules sets.

Let’s be honest: we probably would have published this book anyway. But we’d like to make it special. With your support, this Kickstarter will fund a deluxe presentation of Crypt of the Devil Lich. We have a host of stretch goals we would like to achieve in order to produce a splendid volume.

Perhaps the most cherished dungeon crawl ever published by Goodman Games, Crypt of the Devil Lich has been completely updated and converted to new rules sets. It’s ready for your table: are your players ready for the devil lich?

The heroes are sent into the Devil Lich’s crypt to destroy her before she can return to power, as foreseen in a prophecy. However, the unknowing heroes have actually been tricked into entering her crypt to free her from her prison. If they are truly heroes, they will uncover the deception and defeat the evil Devil Lich before she can unleash her dark designs on the surface world.